Indian History as we know is one of the most perverted & polluted history in the World. The British Colonialists on purpose manipulated distorted changed our glorious history to their selfish colonial political & religious motives.

One of such landmark errors in the History of INDIA is the ARYAN INVASION THEORY. Our pseudo secular Marxist historians / Academicians have continued this injustice to our history to please their political masters who themselves are the followers of Nehruvian Secularism.

Aryan Invasion theory was proposed by Max Mueller the German Linguist & Sanskrit scholar in 1853 who introduced the word ARYA in English language as referring to a particular race and language. He did this in order to give credibility to his ARYAN race theory. However in 1888 when challenged by other eminent scholars and historians, Mueller could see that his reputation was in jeopardy and made the following statement thus refuting his own theory – “I have declared again and again that if I say Aryas, I mean neither blood nor bones, nor hair, nor skull; I mean simply those who speak an Aryan Language.. to me an ethnologist who speaks of Aryan race, Aryan blood, Aryan eyes and hair, is as great a sinner as a linguist who speaks of a dolichocephalic dictionary or a brachycephalic grammar.” (Max Mueller, Biographies of Words and the Home of the ARYAS, 1888 pg 120)

But the die had already been cast & Political & Nationalist groups in Germany and France exploited this racial phenomenon to propagate the supremacy of an assumed Aryan race of White People. Later Adolf Hitler used this ideology to the extreme for his Political hegemony and his barbaric crusade against Jews, Slavs and other racial minorities, culminating HOLOCAUST of millions of innocent people. 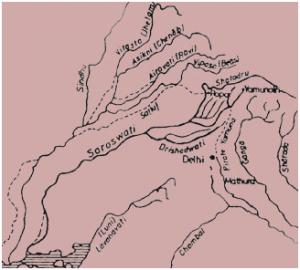 According to this theory, India was invaded and conquered by nomadic light-skinned Indo-European tribes (Aryans) from Central Asia (Caspian Sea) around 2500-1500 BC. They overran an earlier and more advanced dark-skinned Dravidian civilization from which they took most of what later became Indian civilization. In the process they never gave the indigenous people whom they took their civilization from the proper credit but eradicated all evidence of their conquest. All the Aryans really added of their own was their language (Sanskrit, of an Indo-European type) and their priestly cult of caste that was to become the bane of later Indic society.

The so-called Aryans, the original people behind the Vedas, the oldest scriptures of Hinduism, were reinterpreted by this modern theory not as sages and seers – the rishis and yogis of Hindu historical tradition – but as primitive plunderers. Naturally this cast a shadow on the Hindu religion and culture as a whole. The so-called pre-Aryan or Dravidian civilization is said to be indicated by the large urban ruins of what has been called the “Indus Valley culture” (as most of its initial sites were on the Indus river), or “Harappa and Mohenjodaro,” after its two initially largest sites.

The Social & Political implications of the Aryan Invasion Theory was

1.It served to divide India into a northern Aryan and southern Dravidian culture which were made hostile to each other. This kept the Hindus divided and is still a source of social tension.

2.It gave the British an excuse in their conquest of India. They could claim to be doing only what the Aryan ancestors of the Hindus had previously done millennia ago.

3.It served to make Vedic culture later than and possibly derived from Middle Eastern cultures. With the proximity and relationship of the latter with the Bible and Christianity, this kept the Hindu religion as a sidelight to the development of religion and civilization to the West.

4.It allowed the sciences of India to be given a Greek basis, as any Vedic basis was largely disqualified by the primitive nature of the Vedic culture.

5.This discredited not only the ‘Vedas’ but the genealogies of the ‘Puranas’ and their long list of the kings before the Buddha or Krishna or Rama and were left without any historical basis. The Mahabharata, instead of a civil war in which all the main kings of India participated as it is described, became a local skirmish among petty princes that was later exaggerated by poets. In short, it discredited the most of the Hindu tradition and almost all its ancient literature. It turned its scriptures and sages into fantasies and exaggerations.

6.This served a social, political and economical purpose of domination, proving the superiority of Western culture and religion. It made the Hindus feel that their culture was not the great thing that their sages and ancestors had said it was. It made Hindus feel ashamed of their culture – that its basis was neither historical nor scientific. It made them feel that the main line of civilization was developed first in the Middle East and then in Europe and that the culture of India was peripheral and secondary to the real development of world culture.

Such a view is not good scholarship or archeology but merely cultural imperialism. The Western Vedic scholars did in the intellectual sphere what the British army did in the political realm – discredit, divide and conquer the Hindus.

The vedic texts talk about Ganga Yamuna Saraswati as the trio river , the three great rivers of their age. Ganga and Yamuna rivers exist even today in North India and till sometime back Saraswati was thought to be a mythological river. But vedas talk about Saraswati as a mighty river that flowed in the north India during the vedic ages!

There is also the mention of the Ganga Yamuna Saraswati merging at a place called Prayag , which was also called the Triveni Sangam (the current Allahabad in North India where today only Ganga and Yamuna meet). It is said that the Saraswati that merged here with the other two rivers was a subterranean channel of the main river of Saraswati. 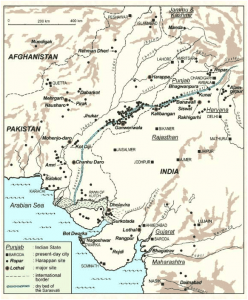 Recent satellite images and geological excavations have proved the existence of a ancient river in North India, with exactly the same features of river Saraswati described in the vedas and Mahabharatha! Today Saraswati is a dried up river today. Before Saraswati dried up, the present Rajasthan was a lush green area! The drying up of Saraswati created the Thar desert in Rajasthan. Even the current dry beds of Sindh and Baluchistan (currently in Pakistan) were lush green fertile lands before the Saraswati river dried up!
2. Latest research in Genetics & Molecular biology has conclusively proved that their has been no influx of foreign DNA in the past 60000 years. “We have conclusively proved that there never existed any Aryans or Dravidians in the Indian sub continent. The Aryan-Dravidian classification was nothing but a misinformation campaign carried out by people with vested interests,” Prof Lalji Singh, vice-chancellor, Banaras Hindu University

The findings of a three-year research by a team of scientists, including Prof Singh and others from various countries, has been published by American Journal of Human Genetics in its issue dated December 9.

“The study effectively puts to rest the argument that south Indians are Dravidians and were driven to the peninsula by Aryans who invaded North India,” said Prof Singh, a molecular biologist and former chief of Centre for Cellular and Molecular Biology, Hyderabad.

According to Dr Gyaneshwer Chaubey, Estonian Biocentre, Tartu, Estonia, who was another Indian member of the team, the leaders of Dravidian political parties may have to find another answer for their raison d’être. “We have proved that people all over India have common genetic traits and origin. All Indians have the same DNA structure. No foreign genes or DNA has entered the Indian mainstream in the last 60,000 years,” Dr Chaubey said.

Dr Chaubey had proved in 2009 itself that the Aryan invasion theory is bunkum. “That was based on low resolution genetic markers. This time we have used autosomes, which means all major 23 chromosomes, for our studies. The decoding of human genome and other advances in this area help us in unraveling the ancestry in 60,000 years,” he explained.

According to Prof Singh, Dr Chaubey, and Dr Kumarasamy Thangaraj, another member of the team, the findings disprove the caste theory prevailing in India. Interestingly, the team found that instead of Aryan invasion, it was Indians who moved from the subcontinent to Europe. “That’s the reason behind the findings of the same genetic traits in Eurasiain regions,” said Dr Thangaraj, senior scientist, CCMB.

“Africans came to India through Central Asia during 80,000 to 60,000 BCE and they moved to Europe sometime around 30,000 BCE. The Indian Vedic literature and the epics are all silent about the Aryan-Dravidian conflict,” said Dr S Kalyanaraman, a proponent of the Saraswathi civilization which developed along the banks of the now defunct River Saraswathi.

3. Also modern research done by Dr. D K Hari on Archae Astronomy using the PLANETARIUM SOFTWARE developed by NASA has revealed the dates of RAMAYANA & MAHABHARATA the great epics which are unjustly called mythology by these Marxist historians.

You carry your wound. With the ego, your whole being is a wound. And you carry it around. Nobody is interested in hurting you, nobody is positively waiting to hurt you; everybody is engaged in safeguarding his own wound. Who has got the energy? But still it happens, because you are so ready to be wounded, so ready, just waiting on the brink for anything.
You cannot touch a man of Tao. Why? – because there is no one to be touched. There is no wound. He is healthy, healed, whole. This word whole is beautiful. The word heal comes from the whole, and the word holy also comes from the whole. He is whole, healed, holy.
Be aware of your wound. Don’t help it to grow, let it be healed; and it will be healed only when you move to the roots. The less the head, the more the wound will heal; with no head there is no wound. Live a headless life. Move as a total being, and accept things.
Just for twenty-four hours, try it – total acceptance, whatsoever happens. Someone insults you, accept it; don’t react, and see what happens. Suddenly you will feel an energy flowing in you that you have not felt before