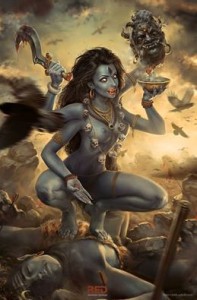 Have you ever seen the statue of Kali?
She is the mother and death also, kal, means death so her name is Kali.
And she is the mother, so she is a woman.
She is beautiful, beautiful like a mother. Nobody else can be as beautiful as the mother.
Even if one’s own mother is ugly, she seems beautiful. Nobody thinks in terms of the beauty of the mother, but the mother is beautiful.
Because if you see your mother as ugly, then that means that you are ugly because you are her expansion.
So Kali is beautiful, very beautiful But around her neck she is wearing a garland of human heads.
She is beautiful, but she is Kali- kal, death.
Western thinkers are puzzled over this symbol.
They wonder why a woman should be depicted so horribly, so terrifying.
And you call her mother also!
How frightening it is horrible, be-cause death starts from the one who gives birth.
It is terrible, because death has arrived along with the birth.
The mother has given death as well as life.
So on one side she is as beautiful as the mother, as the source, and on the other end she is like kal, death, as dark as death.
Around her neck is a garland of human heads in her hand she is holding a severed head, blood dripping, and she is standing, with her feet on her husband.
This is a very deep symbol: woman as life, and as death too.
Because death comes from where life comes, these two are the two sides of the same coin.
And nobody else on this earth realized this fact as the Hindus have done.