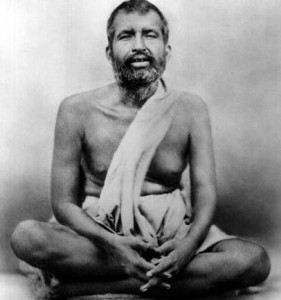 After spreading the message of Vedanta in America and England for several years, Vivekananda desperately needed an assistant to continue the momentum. He wrote to Swami Saradananda and asked him to come to England. In the beginning Saradananda was reluctant, but then he went to Holy Mother [Maa Sharada] and sought her advice. The Mother told him: “My son, be not afraid. You should go to the West. The Master will protect you, and will be with you wherever you go.”

In March 1896 Swami Saradananda left for England and arrived there on 1 April. On the way his ship was buffeted by a hurricane in the Mediterranean Sea. “All the passengers were in a great panic,” the swami recalled. “Some were crying; some were running here and there in fear; some were shaking out of nervousness. The whole scene was frightening, but I was not afraid in the least. My mind was as steady and calm as the needle of a compass.” When the ship stopped at Rome, he went to visit Saint Peter’s Cathedral. Standing in front of the sanctuary, his mind became absorbed in his previous incarnation, and he lost outer consciousness for some time. (Sri Ramakrishna had said that he and Shashi had previously been companions of Christ.)

Swami Vijnanananda practised severe austerities fifteen hours a day for ten years while at the Brahmavadin Club. In 1910 he bought a house and a vacant plot across the road from it in the Muthiganj area of Allahabad. He turned the house into a Ramakrishna Monastery and built another house on the vacant plot for a charitable homeopathic dispensary.
Once the doctor of the charitable homeopathic dispensary resigned. This created a great difficulty for the swami. He could not find a doctor immediately, and he was very concerned for the indigent patients. He pondered: “Well, it is the Master’s work; I shall give medicine chanting his name.”
Swami Vijnanananda had no knowledge of medicine, nevertheless he started to go to the dispensary every morning. He gave homeopathic medicine to the patients without asking about their diseases or physical problems. When the female patients tried to tell him their physical problems, the swami said: “Don’t talk about your disease. Take the medicine and go home.” It was amazing: Every single drop of homeopathic medicine he gave cured each patient – not one had to return for a second dose. When this miraculous news spread, more patients began to appear every day. It became difficult to control the crowds.
Then the swami brought in a doctor from Varanasi and was relieved of the responsibility. The doctor checked the stock of medicine and discovered that even the nitric acid bottles were empty. Frightened and amazed, he said to the swami, “Maharaj, you have cleared even the nitric acid!” Vijnanananda simply said: “I have given medicine in the name of the Master and the patients got well. There is no credit for me; I did as he asked me to do.”!