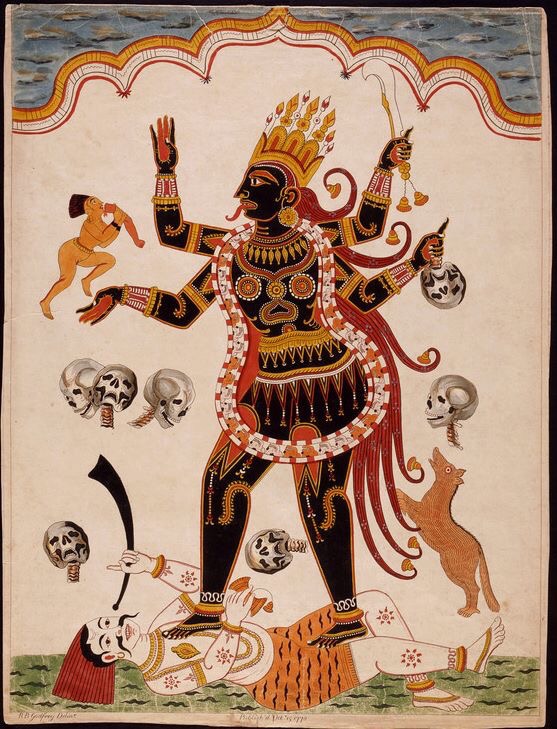 The name Kali which is actually pronounced as “kaali” is taken from the root word “kaala” which can either mean time or darkness. Time denotes motion as time is always in motion. Time has no beginning. It is always changing. In fact, the whole universe and all its objects are always in motion, driven by time. The objects take birth, grow in size, decay and finally die. This whole process is driven by time. And Kali is one who is the essence of time, who is time herself.

Therefore, it is Kali who creates, controls and destroys the universe. She is called as “Adya-the oldest or the first” who is the source of all changes, all manifestations. The other meaning of the term i.e. “darkness” or “black”, also denotes the same meaning.

Just as the colour black denotes an absorption of all colours in science, Kali represents a state wherein the whole universe lies absorbed in an unmanifested seed state (also called as Mula-prakriti). Therefore, as the embodiment of time, she is the creator and sustainer of the universe, and as an embodiment of darkness, she denotes the dissolution of the universe.

She can be considered as equivalent to Samkhyan Prakriti and Vedantic Maya. Therefore, her name or her colour which is black, does not denote that she is a “monster” as many Western interpretations imply.

Now coming to her iconographic details, she is shown as having her tongue lolling out with blood dripping from her mouth. She is usually depicted as having four hands, with one holding a sword, another a severed head, the other two hands are in the mudras of granting blessings and grant fearlessness, or sometimes hold objects like lotus or a bowl. She is naked with dishevelled hair and is usually shown in the backdrop of a samshan (cremation ground). She wears a garland of skulls around her neck and a skirt made of severed hands.

Now, let us look at what these means. A garment is a covering draped on the body. The whole cosmos can be understood as the cosmic body of Kali. There is nothing outside it. Therefore she is without a garment, without a covering. Hence, she is naked. A garment can also represent the limitation of “rupa/form”. The manifestation of various objects is nothing but a manifestation of nama (name) and rupa (form). But, Kali being the unmanifested source has no rupa and hence is naked. The garment may also denote the three gunas i.e. Sattva, Rajas and Tamas, that is worn by Atman (Self) to become manifest as universe. Kali who is non-different from Atman in its absolute state, is without the gunas and hence naked. Therefore, there is no sexuality involved in her depiction as being naked; this is but another common misinterpretation.

The blood dripping from her mouth and her apparent blood-lust depicts a very specific spiritual process of “rakta-shuddi”, the purification of the blood. Blood is the most important carrier of the prana (vital force) in the physical body. The purification of the prana and hence of the blood is very important in Kundalini yoga. Goddess Kali is the one who purifies the prana. Her drinking of blood denotes this purification of blood and vital force. This drinking of blood can also mean the absorption of the individual vital forces into herself. That is, she liberates a person from bondage to physical body and helps him to merge his subtle body into hers thereby attaining spiritual union with her.

The severed head indicates the ego of the individuals that is afflicted with lust, anger, delusion and other passions of the mind. The sword is used to cut this unpurified ego. Goddess Kali is the one who grants purification of the mind by cutting off the limited ego that is afflicted with mental passions called “arishdvarga”. The hands showing the granting of boons and a sign of fearlessness needs no further explanation.

The severed hands represents karmas or actions. Hands are one of the organs of actions and hence is used as a symbol for karmas. She wears a skirt of severed hands, because it is she alone who is able to severe our karmas, and make us free of their bondage. She helps the spiritual practitioners to move towards moksha (liberation), by cutting of their karmas one by one.

The severed heads are sometimes depicted as being 51 in number that depict the 51 letters of Sanskrit and hence the whole domain of speech and knowledge. The garland of skulls may also denote that a person has to undergo hundreds of lives in various bodies before he could attain moksha. The dishevelled hair denote that she is not bound by the rules of human society.

She is usually depicted as having one of her legs on the chest of Lord Shiva who lies on the ground in a static state. This represents the Purusha–Prakriti aspect of Samkhya. Shiva is static absolute Brahman, Kali is the power of this Brahman to have motion. Therefore, Shiva is lying without movement and Kali is standing or dancing on him.

In some depictions, especially with respect to forms like Chinnamasta, the Shakti is shown as being in a sexual union with Shiva who is lying static on the ground. The imagery is a direct depiction of the cosmic union of Purusha and Prakriti. The fact that Brahman and his power are non-different is being depicted in this imagery. The sexual union being the physical imitation of the cosmic union, the imagery aims to highlight the cosmic and spiritual union through sexual union. Further, in certain tantrika sadhanas (tantrika practices), the sexual energy is used to attain a spiritual union.

But, these nuances are either missed or deliberately ignored in the western commentary on Hinduism. Their understanding and interpretation of Goddess Kali is completely alien to Hindu world-view. This freedom of expression without concepts like blasphemy is being misused by certain quarters of western academia, media, and entertainment industry. The tantrika philosophy and spirituality is dismissed as superstition and in their place, perverse, incorrect, and non-existent meanings are being attached to Goddess Kali and other Hindu deities and symbols. But, all is not lost.

Comments Off on Demystifying Kali !!